Revolution is the sudden change in the methods and opinion with new techniques often as a result of progress. It is the process of using new methods and techniques in order to increase the yield. Revolutions in India marked the beginning of a completely new era in various socio-economic fields like agriculture, petroleum etc. Most of the time these revolutions were concerned with only one particular field and through these revolutions that particular field grew exponentially by the creation of a multitude of new opportunities and openings. There are two types of revolutions in India that are given below. 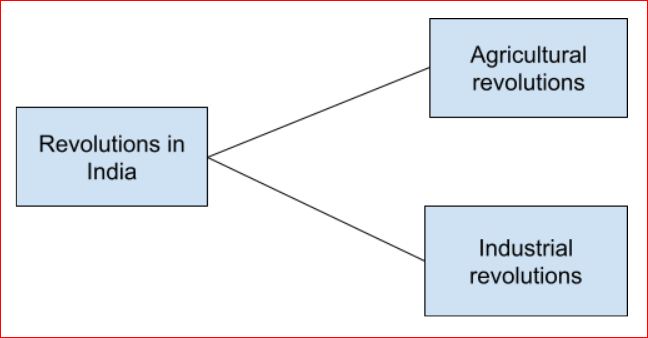 The process of changing an economy from an agrarian and handicraft to one with a dominant industry is known as industrial revolutions.It was the time when there was no, electricity, radio, television, computer, internet, vehicles, etc and people worked with their hands so by this they waste a lot of time in their works. But after Industrialization, their life fully changes. A large number of people enjoy good health facilities, education, travel, a life which is never possible without Industrialization. Industrial development also plays a very important role in providing employment and increasing the economy of the country. Industrialization is a process in which the economy is transformed from agricultural goods to the manufacturing of goods and labour replaced by mechanised mass production. And the period of Industrialization is called Industrial Revolution which started in the 19th century. After 1850 a new phase of India started because a large scale private industry of jute, cotton, and silk was established. The first jute industry started at Hooghly Valley at Kolkata in 1854. To transport the goods easily from one place to another, railways started in India. First Rail started from Bombay to Thane in 1854. This is the fourth era of the industrial revolution in India.

The process of manufacturing where machines were introduced and products were manufactured for the first time. During this period, the discovery of coal and its mass extraction, as well as the development of the steam engine and metal forging completely changed the way goods were produced and exchanged. Inventions such as spinning machines and looms to make fabric were making their appearance. Canal transportation began replacing waggons and mules for moving around these goods.

The invention of the combustion engine went hand-in-hand with these fuel sources. Both steel- and chemically based products entered the market during this time. Developments in communication technology got a jump start with the telegraph and later the telephone. Transportation grew by leaps and bounds with the invention of the plane and the car. Mechanical production grew in speed through the advent of mass production.

Third industrial revolution in India: Electronics and nuclear in 1969

The third industrial revolution in India is entering into the fields of electronics and nuclear industries.

However, the momentum comes not from the shift in energy but from the acceleration of digital technology. The internet and the digital world mean a real-time connection within more and more components of a production line, both inside and outside facility walls. As the development of the internet of things, cloud technology and artificial intelligence continue, a virtual world will merge with the physical world. Predictive maintenance and real-time data will lead to smarter business decisions for a myriad of companies around the world.

Agricultural revolution refers to the significant changes in agriculture when there are inventions, discoveries or new technologies implemented. These revolutions change the ways of production and increase the production rate. The Green Revolution was a period that began in the 1960s during which agriculture in India was converted into a modern industrial system by the adoption of technology, such as the use of high yielding variety (HYV) seeds, mechanised farm tools, irrigation facilities, pesticides and fertilisers.

The increased agricultural production of the 18th century can be traced to four interrelated factors:

The major agricultural revolutions are explained along with the father of the revolutions in the table given below.

To increase petroleum production, the Government planned to accelerate the production of ethanol and to mix it up with petrol to produce biodiesel. Ethanol is a renewable source of energy and is a by-product of sugar production produced from molasses. The blending of ethanol with petrol has been practised in the USA and Brazil for over 70 years. The blending of ethanol with transport fuels would provide better returns to farmers, supplement scarce resources of hydrocarbons and be environment-friendly by reducing pollutants as it helps combustion.

The concept of the rapid increase in the production of fish and marine products through the package programme. It was launched in India during the seventh Five-year plan(1985-1990) when the central government-sponsored the Fish Farmers Development Agency (FFDA).

This revolution focuses on meeting the demand for coffee from developed nations by growing socially responsible and environment-friendly coffee. The Brown Revolution is related to Visakhapatnam’s tribal area.

The period between 1991 and 2003 is referred to as the Golden revolution period of India.it is one of the prominent agricultural revolutions which is related to increasing the production of honey and horticulture. Nirpakh tutaj is the father of this golden revolution. The main purpose was to boost honey and horticulture production as it faced a massive increase from Rs.6308.5 crores in 2004-2005 to Rs. 28,62861 crores in 2014-2015.

Pink revolution is the term used for the technological revolutions in the meat and poultry processing sector. India is a country with a huge cattle and poultry population. The modernisation techniques can yield high potential growth in this sector.

It is the immense growth of egg production in India by the use of modern techniques and methods to enhance the growth efficiently in poultry farming. It was started in 1969-1978 and innovation plays a major role in the growth of this industry. The father of the silver revolution was Indira Gandhi.

This revolution is associated with the increase in the production of milk and dairy products in the country. Verghese Kurien, known as the "Father of the White Revolution" in India, was a social entrepreneur whose "billion-litre idea", Operation Flood, made dairy farming India's largest self-sustaining industry and the largest rural employment sector providing a third of all rural income.

The effects of the industrial revolution on agriculture and farming are listed below:

Q.Which of the following periods is known as the first Green Revolution period in India?

Q. Who is the father of the red revolution?

A. Vishal Tewari is considered to be the father of the Red revolution because he is the one who started the revolution. This is related to the production of tomatoes and meat.

Q. What is the Rainbow revolution?

A. The concept of the Rainbow revolution is an integrated development of crop cultivation, horticulture, forestry, fishery, poultry, animal husbandry and food processing industry.

Q. What is Purple revolution?

A. Purple revolution was launched to empower domestic farmers and increase the production of homegrown varieties.

Q. What are the effects of the industrial revolution on agriculture and farming?

Important Days in October 2022: Check the National and International Days with their themes