Crops are plants or plant substances that are planted and harvested for the use of humans and well being of living things on the earth. A crop is a plant or an animal product that is allowed to grow and also harvested for for-profit purposes. The crops can be consumed for daily uses as food like grains, vegetables, etc., and can be traded commercially. Most farmers do grow different types of crops in India and other countries on various farms. The crops can be classified into two types on the basis of the season in which it is planted and harvested.

Types of crops in India: List of crop producing states in India 2022

On the basis of the season in which the crops are planted and harvested the crops are classified into three. They are mentioned below.

The second type of crop in India is the Rabi crop. The word Rabi is derived from an Arabic meaning spring. The period for these crops is from October to March. They are grown in the winter season and harvested at the beginning of the spring season. For example, wheat, gram, mustard, peas, barley, etc. These crops are not easily affected by rainfall as they need less amount of water to grow.

This is the third type of crop in India. The crops grow in the Zaid season, i.e. between March to June. This is the shortest season compared to Kharif and Rabi season crops. For example, bitter gourd, watermelon, pumpkin, cucumber,  etc.

Classification of crops: List of Crops Producing States in India 2022

Food crops are essential sources of energy for the body. Nowadays, the demand for the supply of food crops is on the increase. To maintain the balance of food, we need to protect the crops from pathogens which could be ectoparasites, viruses, bacteria, oomycetes, fungi, protozoans, or nematodes. The major purpose of food crops is mainly to feed the farmers. Simple farming methods are used just to sustain domestic needs.

India is one of the major oilseeds growers and importers of edible oils. The diverse agro-ecological conditions in the country are favorable for growing 9 annual oilseed crops, which include 7 edible oilseeds (groundnut, rapeseed & mustard, soybean, sunflower, sesame, safflower, and niger) and two non-edible oilseeds (castor and linseed).

A spice is a seed, fruit, root, bark, or other plant substance primarily used as a flavoring agent in foods. The spice can be leaves, flowers, and stems of the plant which is used for flavoring and coloring. Some have medical power and some are used for fragrance and perfumes.

India is famous for its agricultural occupation and the maximum population in India depends on agriculture for their living. Agriculture plays a major role in the lives of the people. It contributes to a larger scale of GDP rate and economic rate for Indias’ growth. Here is the list of the largest producers of each crop and the state which is responsible for its massive production. Each state contributes an amount to India's economic growth. Uttar Pradesh is India's top farming state, with considerable state-level crop production including bajra, rice, sugarcane, food grains, and many others. It ranks first among India's wheat-producing states, ahead of Haryana, Punjab, and Madhya Pradesh. The following table contains the largest producers of various crops along with the position of production.

The top 10 states in producing crops are explained below with a bar graph.

Indian agriculture is evolving at the same time as the country develops. Food production and consumption patterns are shifting. In India, there has been a rise in population, income, rural/urban mobility, and extension of rural per capita productivity for several years. Demand for food increased as a result of the improvement of all of these elements. The top 10 leading crop producing states in India are listed below.

The average yields of each crop in the previous year are explained below. 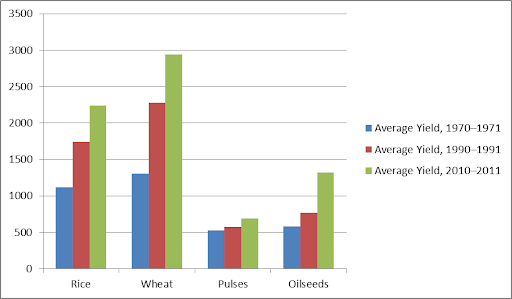 The production of various crops in various years is listed here ( in hectors).

The process of producing food, feed, fiber, and other products by the cultivation of different plants and growing domestic animals such as cows, sheep, horses, etc (livestock production) is called agriculture. It is an important source of food supply for humans.it is the source of the world's food supply. Agriculture is the single largest employer in the world.

The process of agriculture includes

The farming systems that have been practiced in India are subsistence farming, organic farming, and commercial farming. The regions that contribute to agriculture differ in types of farming they use all over India and they are based on horticulture, agroforestry, ley farming, and many more. due to the geographical location, climate differences occur. Based on the nature of the land, climatic conditions, and available water the agriculture practiced by the farmer may differ.

Subsistence agriculture is where the farmer and their family cultivate crops and cereals for their own and for local markets. Cereals like millets, rice, wheat, and maize are cultivated here. As the farmers can't offer more for irrigation and fertilizers they cultivate small land for their own use.

Commercial farming is done for the cultivation of cash crops. It is done on a large scale basis as these are sold out in international markets. This type of agriculture is done in sparsely populated areas such as Gujarat, Punjab, Haryana, etc. The crops that are cultivated in this farming are sugarcane, wheat, jute, cotton, etc.

Importance of Agriculture: List of crop producing states in India 2022

Around 58% of the total land in India is dependent on agriculture. Indian lands are fertile for both cash and food crops. Agriculture is the life essence of many people in India. It is the single largest employer in the world. With a 70% of growth scale, India is the 6th largest global food marketing and producing land. The history of agriculture dates back to the Indus valley civilization. In the case of farm outputs, India ranked second worldwide. 50% of the Indian workforce are part of the agriculture sector and the agriculture sector is contributing around 17–18% to the country’s GDP.

Q.Which state has the highest agricultural production in India and names the crops cultivated there?

Uttar Pradesh is India's top farming state, with considerable state-level crop production including bajra, rice, sugarcane, food grains, and many others. It ranks first among India's wheat-producing states, ahead of Haryana, Punjab, and Madhya Pradesh.

Q. Who is the biggest farmer in India?

A. Ram Saran Varma is the most prosperous farmer in India. He uses modern techniques for farming and brings out the most successful farming in India.

Q. Which state farmers are the richest in India?

A. Now, the northern states of Meghalaya are the richest in India. As they earn about Rs.29,346 per month as farmer households which is greater than Punjab’s household i.e. 26,701.

Q. Where is the largest farm located in India?

A. Nagaland with an average of 5 hectares is the home for the largest farming in India. Punjab and Haryana are known for their agricultural output.

Q. Which state is known for growing rabi crops?